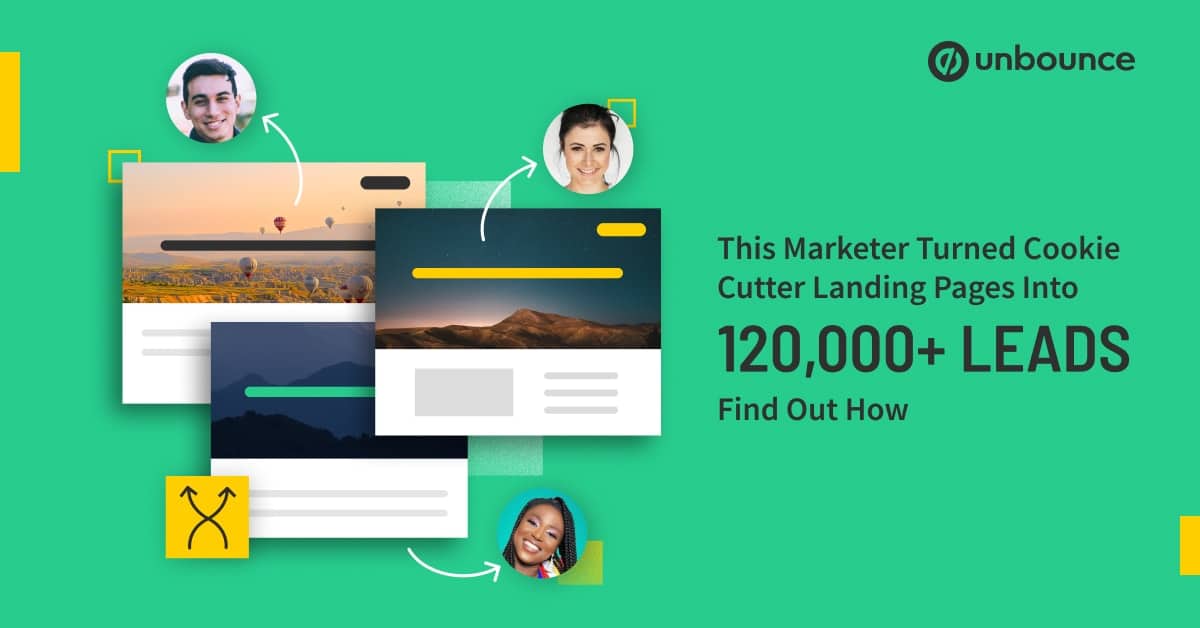 “Cookie-cutter” is one of the last things you’d wanna hear when it comes to describing your marketing.

“Marked by lack of originality or distinction.” “Exactly like others.” “Not enough attention is paid to individual differences.” In a marketing world where thousands of similar businesses are vying for the same customers, this type of marketing simply won’t cut it.

You’ve heard it before: The only way you’ll catch your audience’s attention is through relevant, unique content. It’s about hitting one customer with a latte ad before they realize it’s only noon and they’re already exhausted, and another with a cold brew promo because dang, it’s hot where they live. While these tailored experiences once seemed serendipitous—they’re now expected by your customers.

But what’s the fine print? Endless amounts of time? A sizable marketing team? Six arms? Let’s be real—small businesses don’t have the resources to manually tailor their content to each and every prospect.

The best part is you can do it yourself. So stick around for the 3-step guide at the end of this post. Bring a blank landing page, Smart Traffic, and your marketing know-how.

On a Mission To End Cookie-Cutter Marketing

Christian Krohn is the founder of Patient Clicks, a marketing agency that serves independent paramedical clinics, including physiotherapy, massage therapy, and chiropractic care. He’s spent over 20 years in the industry himself—from owning clinics to running the marketing department for a large national chain.

Over his years in the biz, he’s noticed a glaring problem: This industry is overrun by cookie-cutter marketing. All websites, ads, and landing pages look the same, making it pretty darn difficult to capture the attention of new patients. He explains:

Bob’s physiotherapy does one thing, and then Susan’s physiotherapy comes along and sees what Bob does, so Susan copies Bob. Then James copies Susan. And before you know it, everyone’s kinda doing the same thing. — Christian Krohn, Unbounce Customer and Owner, PatientClicks

In other words, there was a huge opportunity to help clinics create marketing material that stands out. So when he created Patient Clicks in 2018, his mission was pretty clear: to eliminate cookie-cutter marketing.

Christian’s marketing brings the best of both worlds. He lands more leads and patients for his clients and reduces their cost per conversion and cost per acquisition: “That’s the name of the game. We want [our clients] to pay as little as possible to acquire a new patient.”

Saving money, growing revenue—that’s music to any small business owner’s ears. Some of his clients are seeing hundreds of thousands of additional annual revenues. Relevant marketing isn’t just about pleasing your customers. It’s shaping up to be a huge competitive advantage.

With his clients’ clinics spanning 300 locations, Christian’s gotta deliver relevant content to many different visitors. And heck—it’s not like he has time to manually create 300 different landing pages for each campaign, either.

So he doesn’t. He uses landing page templates.

Then he explained they aren’t any ol’ templates. He created his own templates tailored to these industries.

Traditionally, this would involve months of split testing and loads of ad spend. But that’s not how he did it. He used Unbounce’s conversion intelligence tool, Smart Traffic.

Smart Traffic is an AI-powered marketing tool that makes optimization a reality for even the busiest marketers. We’re not surprised that someone like Christian—with oodles of campaigns on the go—incorporated it into his toolkit.

How does it work? You create a few landing page variants, turn it on, and let AI do its thing. In as little as 50 visits, it’ll start reading your visitors’ attributes and send them to the variant most relevant to them.

While most marketers will just use Smart Traffic for its AI-powered traffic routing (which is totally groovy by us), Christian takes it a step further: He also uses Smart Traffic to conduct variant tests. Through these tests, he gains insights on his audience’s preferences—and then uses these insights to build and tweak his templates.

These supercharged templates are his starting point for every campaign. That means every variant he publishes is already data-backed from previous tests and the landing page elements are proven to convert in these industries. Now, it’s just a matter of making these templates convert even higher.

But he had to take a leap to get there. While Christian describes Smart Traffic as “a linchpin in [his] PPC efforts,” he admits he wasn’t an early adopter. We get it—marketing tools are sprouting up everywhere, so it can be tricky to weed out the bad ones from the good.

So he started off cautiously. He turned on Smart Traffic for half of his campaigns and continued to test the other half manually. The verdict?

Smart Traffic was exceeding our abilities as humans to test. It was better on every level.

Now, it’s practically clockwork: he creates a few variants, turns on Smart Traffic, and checks back on the results to gather learnings to tweak his templates. They keep getting better and better, and so do the campaigns’ performances—in no time flat.

Smart Traffic provides the levers we need to pull to ensure our paid campaigns are viable. I wouldn’t ever think about leaving Unbounce because it has all the key things we need—even if there was a cheaper platform out there. I’m so content with what we have at Unbounce.

Curious to see what it’ll do for your campaigns? Jump into our builder with this 14-day free trial and try your hand at the Christian Method. (…Too much?)

You stuck around for the goods—and let me tell you, it’s worth your while. Here’s how you can create those supercharged landing page templates for your own business, straight from Christian’s playbook.

In order to build a landing page template that’ll convert in your industry, you gotta do some testing to see what resonates with your audience and what doesn’t. To do that, you’ll need some variants.

Variants don’t need to be (and typically aren’t) new landing pages. They are variations of one landing page, made to isolate and test an element. You could play around with different:

Depending on your business and industry, certain information has to be on your landing page. (Like for paramedical services, you gotta include insurance and payment information, doctor bios, a list of treatable conditions, and patient testimonials.) Once you’ve nailed this down, you need to consider how you’ll present this information. That’s where the testing comes in.

If this is your first time testing variants, consider taking a page outta Christian’s book:

We start with two to three completely different landing pages—visually different, messaging is different—and then eventually Smart Traffic will help pick the winning one. Once we have the winning one, we’ll create multiple variants. Just duplicate the page two to three more times, and then tweak one element at a time, like just the headline. It’s very micro-focused.

It could be as simple as swapping out hero images, as Christian did for this campaign. Here, he wanted to test if authentic photos from the clinic would perform better than stock photos.

These little changes may seem insignificant, but they all add up to provide a clearer picture of your target audience—and what’ll get them to convert. Whether you’re a digital marketing intern or a bigshot CMO with years of experience, if you simply publish one landing page and never look back—you’ll never know why some convert and others bounce.

So create that landing page. Duplicate it. Build some variants. And publish ’em.

Really, that’s it. One click and you’re done. Set it—and then forget it.

The main reason why small businesses put off testing and optimization tactics is because they take a whole lotta time and resources. Find a tool that’ll do the legwork for you, and all of a sudden it becomes a possibility.

To Christian and his team, this is one of Smart Traffic’s biggest selling points. With Smart Traffic handling the testing and optimization, you can put your bandwidth into other parts of the business.

Manually tracking is way more labor-intensive and time-consuming. We’ve been super busy…but we do know in the back of our minds that [Smart Traffic] will find the right variant for us and continue to show the right variant until we’re ready to get back in there and put ideas into some new variants.

Once Smart Traffic is turned on, you too can sit back and let AI do its thing. Heck, go ahead and work on another task—your optimization strategy is officially on autopilot.

You’ll know Smart Traffic is starting to work its magic when you see the Learning Status shift to “Optimizing” on the dashboard.

If you’re curious how Smart Traffic is impacting your performance, you can also see the conversions gained and the conversion lift in this dashboard. It’s pretty satisfying to see it all come together.

3. Take those juicy insights and build a template

You created variants to test an element of your landing page. You turned on Smart Traffic. It’s optimizing like nobody’s business. Now what?

You start taking notes. After each test, you’ll uncover a nugget of information that’ll help you build a cookie-cutter template that’s relevant to your industry and audience. Christian explains:

As we continue to do more testing and acquire more knowledge on which variants—and which aspects of those variants—perform better, they become locked in templates. Then when we get new clients, we plug them in right away. It may not work perfectly, but we have a great baseline to start from, and then we tweak for that client—instead of starting all over again from scratch.

Take a look at your dashboard. Which variants are performing well? Which ones aren’t? What’s different about them?

Tip: One underrated feature of Smart Traffic is that it’ll suggest deactivating variants that aren’t performing well. So what? This boosts your ROI by focusing traffic on your best-performing variants.

For this campaign, Christian tested a call option and look how much better it’s performing:

Now, he includes click-to-calls in most of his templates and campaigns.

While testing still requires some work, it becomes much more feasible with Smart Traffic. You don’t need to wait months for data to come in. You don’t need the expertise to analyze this data. You can leave all that in the hands of AI.

Before you know it, you’ll have a few tests under your belt, which means it’s time to build your template. With this template in tow, every single variant you create moving forward will be powerful and relevant.

The bar is officially set—and it’s set higher. Your focus will shift from converting visitors to converting more visitors. Yep, with Smart Traffic, you can have your cookie and eat it too.

Struggling With Customer Acquisition?: Fix This One Alignment Issue